How a persistent stomachache turned into a perforated colon, then sepsis, and required emergency surgery, leaving me with a colostomy bag at age 48.

One of the reasons that I began this site was to blog about my midlife health experience. And yet, here it is a full seven months since I started blogging, and I haven’t done it yet. I was initially going to write only about my health journey and the issues regarding it, but I decided that I don’t want to be defined by it. I’d rather write about so many other things related to living my best life and helping other midlife women do the same.

This week marks two years since that autumn evening I walked into the emergency room and my life got turned upside down, and I am finally comfortable talking about it.

It was just a regular fall day. September 29, 2017, to be exact. I came home from work and started getting ready to go to my son’s junior varsity football game. It was when I was gathering a few things to bring along that I noticed my stomach started to hurt. I sent my husband, Joe, a text reminder to not be late from work since the football game was nearly an hour’s drive away, and went about continuing to pack up.

Before he got home, however, I decided I didn’t feel well enough for a long car ride and hours of sitting on an uncomfortable cold bleacher bench. Joe went without me and I tried to get some rest.

A few months prior, I had undergone a total hysterectomy. After enduring many months of lower abdominal pain, tests showed I had fibroids and cysts, and a hysterectomy was recommended. I was finally feeling like myself again after recovering from that, and now there was more abdominal pain. I convinced myself it was nothing and would go away as quickly as it came on.

Eventually, Joe and my son returned home; I was still no better. He offered to take me to the ER, but I felt I could sleep it off. I tried for hours to sleep but the pain wasn’t subsiding, in fact, it had gotten much worse. I woke Joe and said I thought it might be time to visit the ER.

I felt a bit embarrassed. It was just a stomachache. I assumed I would get there only to be turned around and sent back on my way after being diagnosed with gas or constipation or maybe some normal hysterectomy recovery discomfort. But that’s not what happened. The triage nurse took my temperature and said I had a high fever. I was given a room and a gown to wear.

The attending doctor thought a CT scan would be helpful in determining the problem, so I drank some foul-tasting liquid, had the scan, and then waited. Luckily, they gave me an IV drip with pain meds, and I began to feel much better. So much better that I sent Joe home to get some sleep and to be there to get our son up for school in the morning. At this point, I was still anticipating going to work the next day but thought I may end up getting in late by the time I got home and washed up.

Finally, the doctor returned. He had been speaking with the on-call surgeon regarding my scan, which showed I had diverticulitis. This was news to me, but I remembered that my father and grandfather had it so it must be hereditary; I’d just google it when I got home, make an appointment with my doctor, and go from there. 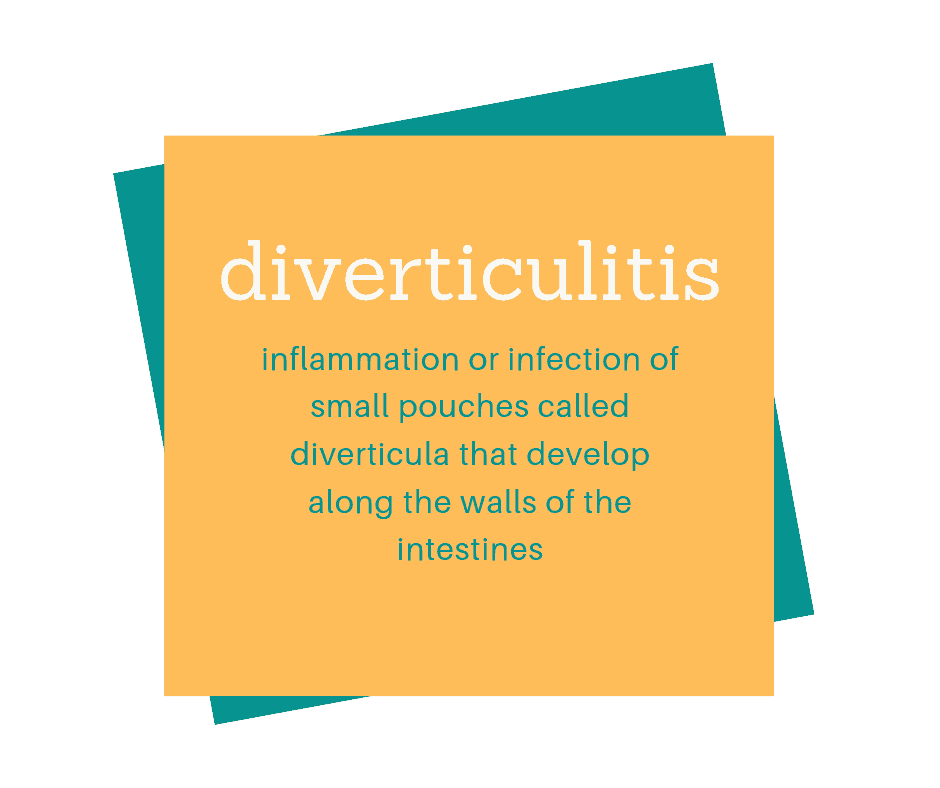 But that wasn’t all. It had caused my colon to become so inflamed that it had perforated. Emergency surgery was necessary.

I wanted to speak with Joe and call my own doctor to discuss this but was told there was no time for that. My body was in sepsis.  I would be having surgery as soon as the surgeon was ready – whether my husband was there or not. If I waited, I would die.

If that wasn’t enough to try and digest all at once, he also informed me I’d be left with a colostomy. I remember saying, “Pardon my ignorance, but what the hell is that?”

I am pretty sure that was when I lost my shit. No pun intended.

From there, things happened so quickly and are a bit fuzzy. I called Joe and he raced back. It was still the wee hours of the morning so instead of calling, I began sending texts to my family.  Crazy things ran through my head. What if they don’t get me into surgery quick enough? What if I don’t wake up from this? The texts to my sisters must have been frantic because they were at the hospital before I even got wheeled into surgery. The texts to my children were not so easy. I wanted to say so much, just in case. But I didn’t want to worry them, and I wasn’t thinking clearly. I honestly can’t recall what else I said, other than I was proud of who they are, they should always stay close with each other, and that I loved them.

I was lucky that the pre-op nurse happened to be a friend of mine. She explained things to me and my family that we would never have thought to ask about. I learned a little about the colostomy bag I’d be waking up with, and the wound vac that would come home with me, so that I wouldn’t be frightened by it all when I awoke after surgery. If you aren’t familiar with a wound vac, don’t google pictures – you have been warned.

The surgeon ended up removing my entire sigmoid colon (about a foot and a half). I was in a great deal of pain, but that was the easy part. I had a gaping open wound up and down my belly. The wound was stuffed with some type of foam and a vacuum sort of thing was attached to it. There was a constant pulling pressure and it was extremely uncomfortable, but again, that was the easy part. Next to the wound sat the colostomy bag. For many days, I had no idea what was under the bag. I refused to look.  I just wasn’t ready.

I had great caregivers while I was hospitalized. I was in the same hospital, on the same floor, and even remembered some of the nurses from when I had my recent hysterectomy. What was slowly becoming clear was that I most likely didn’t need that hysterectomy surgery. That whole while I was experiencing abdominal pain, it was likely due to diverticulitis, which I wasn’t even aware I had until now.

The first two weeks at home were rough. And that is putting it mildly. I had home care nurses come by the house every few days to tend to the wound and assist me with the colostomy. I was refusing to eat anything. My thinking was if I didn’t put anything in then nothing would need to come out. I only ended up causing other issues by doing that and became more ill.

I joined an online colostomy forum and was horrified by what I read.  I did a lot of crying – and I mean a lot of crying. I was on the phone with a friend one day, crying, explaining all these horrible things that I was expecting to start happening to me because those things were happening to the people in the forum. She told me to stop visiting the forum for a while. She said I wasn’t reading any success stories because it’s always the negative that gets shared most often, especially by folks that were frightened, worried, in pain, and anxious. That made a lot of sense to me and I took her advice. 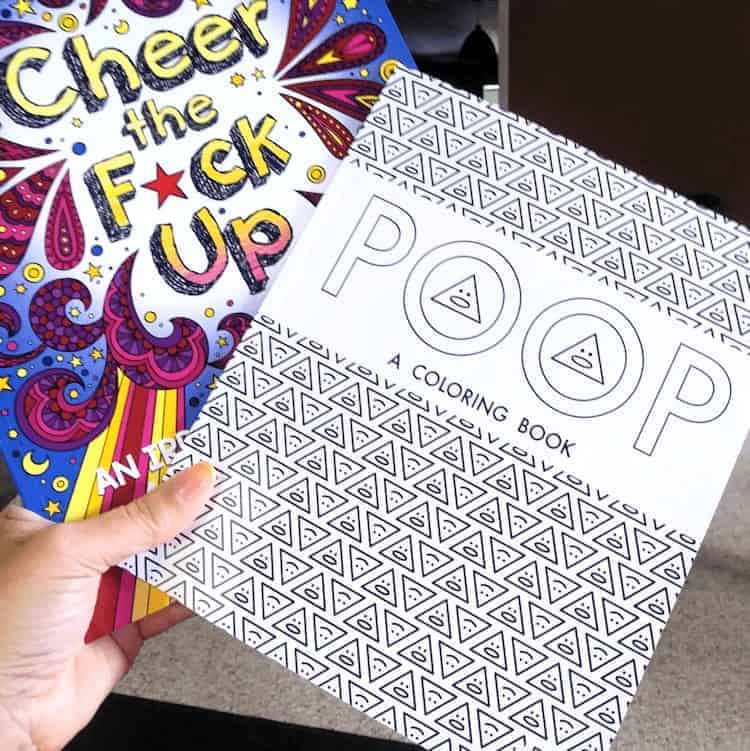 My daughter lifted my mood from afar. She sent me some coloring books and told me how coloring is a great form of therapy. It initially gave me a much-needed laugh, but as I began coloring I realized just how much it calmed my nerves and relaxed me. (Know someone who would benefit from these particular coloring books? You can find them here and here.)


I didn’t hold a pity party for myself for too much longer after that. I started to feel better physically. The wound was beginning to heal so I got to ditch the wound vac, and I realized that I was still ME. Even with the newfangled accessory attached to my belly.

Over the next two months, I went from being unable to look at the colostomy, to being able to change the bag in record time. I went back on the colostomy forum, this time offering support and positivity to people in the same position I was in a few weeks prior – because I knew how much they needed it.

I even ventured out of the house a bit. I recall my sister and niece talking me into joining them for our annual Black Friday midnight shopping excursion. I initially said no, but then thought, why not? I have to start living my life again. There was a point when I was standing in a long line, elbow to elbow with other shoppers and it dawned on me that no one knew I was wearing a colostomy bag. And honestly, I doubt anyone would have cared.

I am extremely fortunate to have since been able to have a successful colostomy reversal. The road to recovery from that has been unpleasant, long, hard, and not without several complications, but that is a story for another day. For now, I am still having disagreeable residual effects, but I am alive to complain about it, and for that, I will forever be grateful. 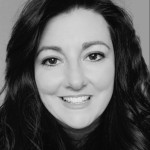 2 thoughts on “But It’s Only a Stomachache…” 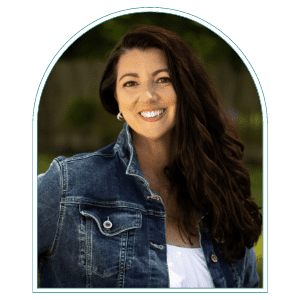 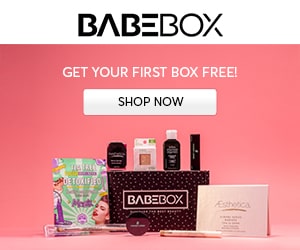